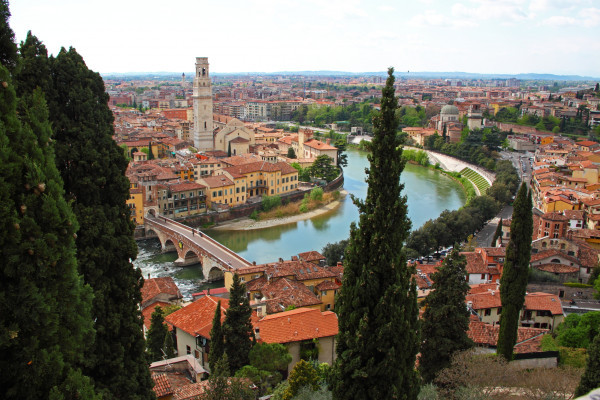 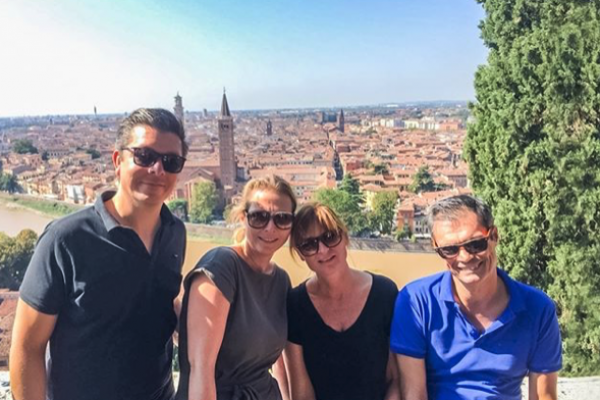 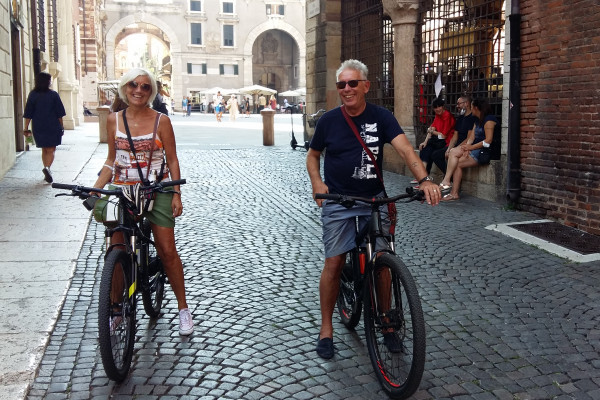 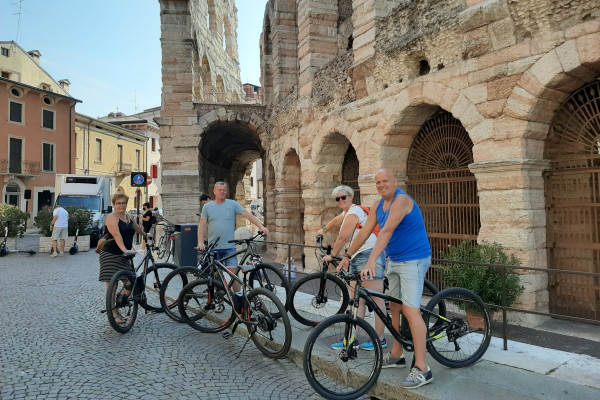 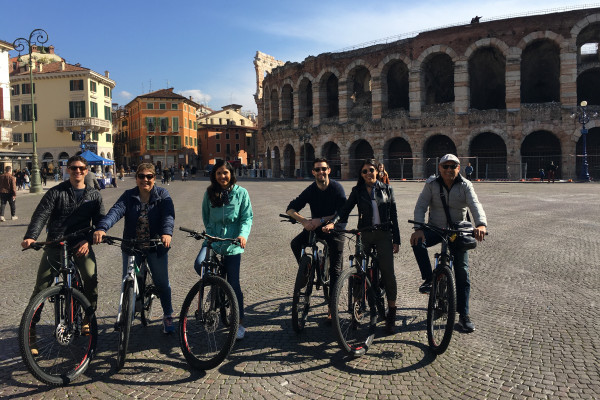 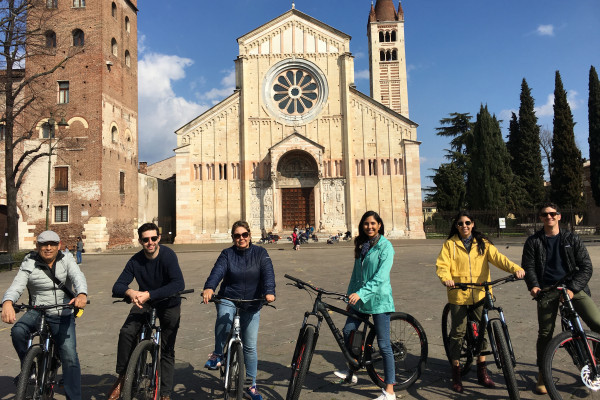 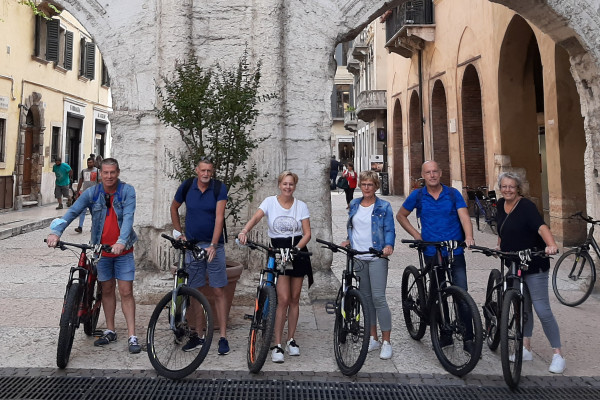 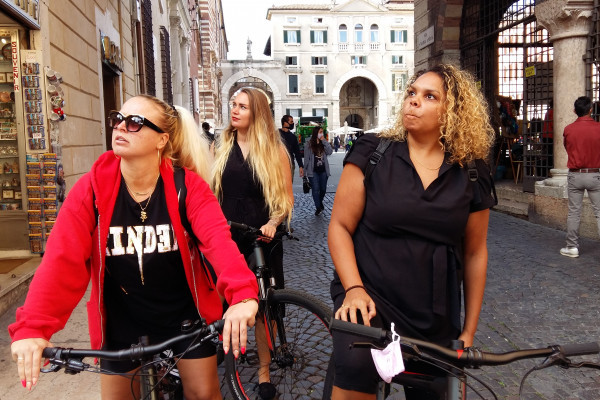 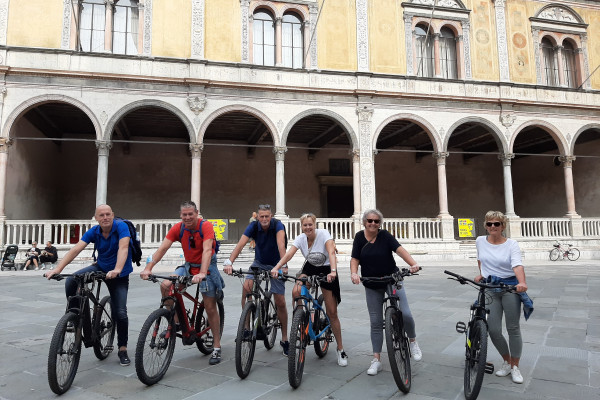 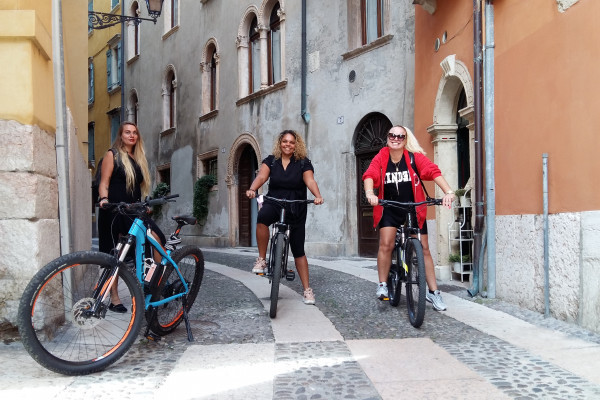 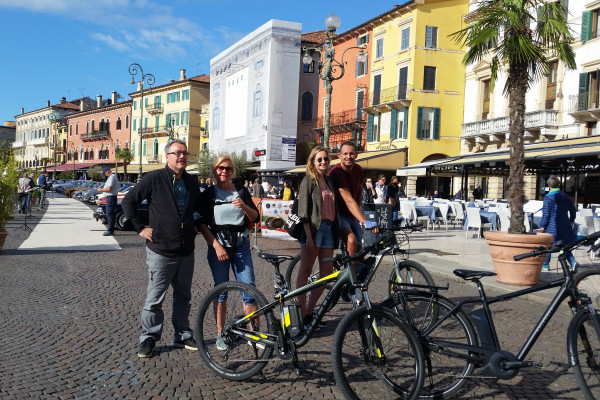 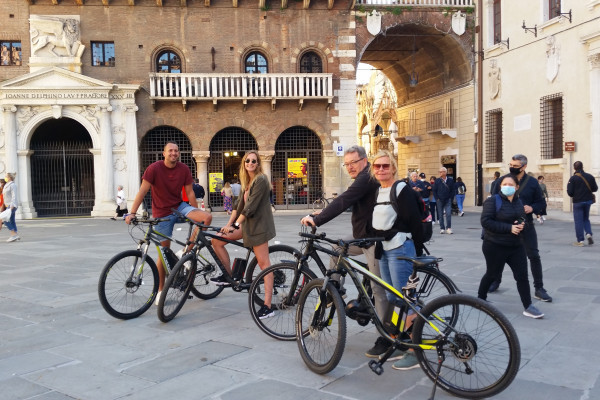 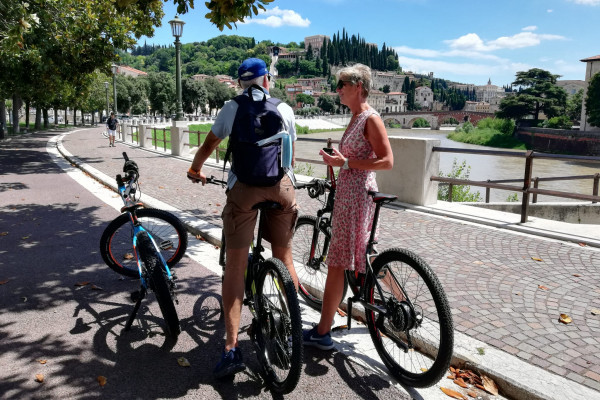 Get the best out of Verona with an e-bike ride. Join a 3-hour overview of Verona with an impressive panoramic perspective on the Adige river. Cycling with us you will experience a well-balanced mix of unmissable touristic attractions and local hidden gems, spiced up by fashinating stories.

You start your bike tour jumping on the saddle of your e-bike to head to Piazza Bra where you cannot escape a close encounter with the colossal pink-tinged marble Amphitheatre, the Roman Arena, the city’s legendary open-air Opera House, where you, together with aficionados from all around the world, can live a night of world-class music lit by tens of thousands of candles.

Pedal till Porta Borsari, the ancient Roman gate that dates to the 1st century AD, and reach the Market Square, Piazza delle Erbe, once the town’s forum, during the time of the Roman Empire, and now a wonderful open-air market surrounded by historical buildings with frescoes and sculptures.

Blend yourself in the knot of lanes and honor with a visit the Verona temple of love, Casa di Giulietta, at Via Cappello no. 23. Find a place in the small crowded courtyard, where you will find a bronze statue of Juliet, and imagine to be hidden by the darkness and suddenly hear her at the balcony talking in the moonlight.

Back on you e-bike but still surrounded by pink floating hearts, you head to the central Medieval Piazza dei Signori e Arche Scaligere, where you admire beautiful buildings and join the vivacious atmosphere of the square before cycling towards the Adige River.

From Brà Molinari you have a spectacular view of the city’s river and hills and, after stopping in front of the Duomo and crossing the ancient roman arch bridge Ponte Pietra, prepare yourself for the highest emotion of the tour: Castel San Pietro where you have a breathtaking panoramic view of Verona.

Cross back over the river on the Scaliger bridge, a fortified bridge built in XIV century and unfortunately destroyed, along with the Ponte Pietra, by the retreating German troops on April 24, 1945, now faithfully rebuilt with original materials.

You end your bike tour be with the magnificent Romanesque Basilica di San Zeno Maggiore where a beautiful Mantegna’s masterpiece is shielded.

Verona will win your heart at every corner.

0 Reviews
Unfortunately there are no reviews available. Be the first to review Small group Panoramic Overview of Verona E-bike Tour.
€45.00